Alexander Calder and the timelessness of art 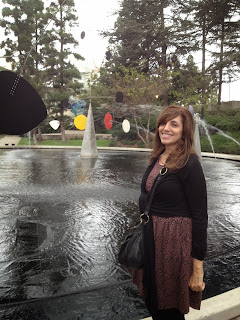 I enjoyed attending the press preview for Calder And Abstraction: from Avant-Garde to Iconic, at LACMA (Los Angeles County Museum of Art). The exhibit re-contextualizes almost 50 of Calder's captivating abstract sculptures in a lyrical setting designed by Frank Gehry.

The retrospective surveys Calder's two significant forms - mobiles and stabiles - spanning more than four decades of the American artist's career. Calder spent many years in Paris, and was closely affiliated with the European avant-garde. After a visit to the studio of Piet Mondrian in the 1930s, Calder made a profound shift towards abstraction. His background in mechanical engineering gave him the technical facility to realize a unique and revolutionary artistic vision - introducing his signature kinetic sculpture to the lexicon of modern art.

Still fresh and surprising today, his sculpture is ingenious, each piece a careful balance of form with color - and science with art. The property of balance itself is a key element of his work, as each sculpture was conceived and constructed so that even the most asymmetrical structure is suspended with perfect equilibrium. Propelled in gentle movement by ambient air currents, the mobiles float with grace, their elegance reflected in rippling shadows.

It's entrancing to linger in front of each piece and admire the inherent strength, delicacy and air of whimsy. Calder's wit infuses La Demoiselle (1939, sheet metal, wire and paint) which somehow captures the essence of French femininity. In Tree (1941, sheet metal, wood, glass, mirror, plastic, wire, string and paint) little orbs and discs catch the light as they move through space. I was mesmerized by Gamma, (1947, sheet metal, wire, paint) with its intricate harmony of lines. It's particularly striking to stand at either end of Gehry's curving gallery space, and view the exhibit in its entirety, under the carefully orchestrated lighting.

Before leaving LACMA, I made my customary pilgrimage to the sculpture garden, to see Three Quintains* (aka Hello Girls) Calder's sculpture in the fountain, commissioned by the Museum in 1964. Almost 50 years later, I watched, enchanted, as the three mobiles danced in the water.

Shifting to the contemporary, following are links to two of my recent art reviews published in Whitehot Magazine of Contemporary Art:

~ I was fascinated to encounter the work of Irene Hardwicke Olivieri, an artist who channels her passion for the environment through paint. Here's a link to my review of Breakfast in the Forest, her recent exhibit at Robert Berman Gallery in Bergamot Station - published this month in WhiteHot Magazine.

~ I also reviewed Maya Hayuk's dynamic, monumental, color-infused murals in the entry staircase of the Hammer Museum for WhiteHot Magazine.

*Quintain - I had to look it up (Middle English from Old French) - a practice target used in jousting. Calder named the sculpture Three Quintains. It acquired the name Hello Girls because of the way its parts wave in the wind.

Posted by Megan Frances Abrahams at 10:37 AM