Hugo the book, Hugo the movie 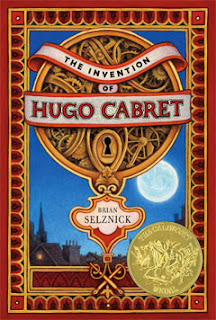 It took me a while to see the movie, but I read the book, Hugo, by Brian Selznick, not long after it came out in 2007. I was lucky to pick up a signed copy soon after its release - at a bookstore in Scottsdale, Arizona, where I was temporarily living at the time.

I was enthralled. A graphic novel, Hugo was an experience that seemed to transcend the medium of literature and transport itself into a film-like realm. The book itself is cinematic - the page turns of Selznick's successive drawings are action sequences like frames in a movie. And of course, the story is inundated with film references). Fast forward (that's film talk) a few years later. I learned Martin Scorsese was directing the film adaptation.

I gave my son the book a long time ago and I'd been nagging him to read it ever since. Then came the Oscars. The movie was still in theaters, but for how much longer? Shane finally read Hugo - and loved it. Just last Sunday afternoon, mere hours after he turned the last page, and a few years after I had, we saw the movie together. The story was fresh and vivid in Shane's mind but the details were a little more vague in my memory. Even so, we both had the same reaction. The movie was wonderful - but the book was visionary. If you haven't see Hugo the movie yet - make sure you read the book first. It doesn't take long. There are a lot of pictures!

BTW - here's a fascinating story I read in the Sunday New York Times about a guardian of conventional books who is saving them in a vault after they are digitized - a literary Noah's Ark.

What's your favorite film adaptation of a children's - or any book?


Posted by Megan Frances Abrahams at 6:00 AM

I read this with my boys and then took them to the movie (blogged about it, too). They were both marvelous!

I adored the book and haven't seen the movie, although I've heard it was well done. His new book, WONDERSTRUCK, is amazing too.

The film version of my manuscript will be my favorite.
Sincerely,
Hollywood Go Lucky

I love Charlie and the Chocolate Factory both as a book and a movie.