On Discipline - A guest post by YA author Joanna Philbin 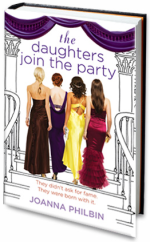 I'm delighted to host a guest piece on the discipline of writing by Joanna Philbin, author of the YA series, The Daughters (Poppy/Little, Brown and Company).


I asked Joanna to write about discipline because I admire her very much. Her debut book, The Daughters, was released May, 2010. The second book in her series, The Daughters Break the Rules, came out November, 2010, the third, The Daughters Take the Stage, in May, 2011, and the fourth, The Daughters Join the Party, was released November 1. That's two books a year! I'm in awe, and I could use a few tips - which Joanna has generously shared.


To celebrate the release of, The Daughters Join the Party, we're having a book giveaway. To enter to win a signed copy - see below. Open to YA fans in the U.S. and Canada!

As a writer, I get the same question over and over again when people hear what I do: "How do you manage to be so... disciplined?"

Discipline. To me, the word conjures images of little children holding out their knuckles to be smacked with rulers, or dieters carefully measuring out cereal with a measuring cup.  Not exactly the thrilling, liberating, dizzying feeling I have most days when I'm alone in my house, writing. I am addicted to this feeling. And like any good addict, I'll do whatever I can to feel that way. As Julia Cameron points out in The Artist's Way, there's discipline and there's enthusiasm, and when we talk about doing something creative that makes us happy, more often than not it's enthusiasm - that feeling of "Yes, I love this!" - that gets us to begin.

But I admit that every once in a while, enthusiasm is a little hard to come by.  Some days I'm tired, or my brain feels completely hollowed out, or I'm possessed by the sudden urge to clean out my closet or mop the kitchen floor.  So, what, you may ask, gets me to my desk on days like this?

I remember my deadline. As a YA writer, I am always on a strict deadline. Frankly, I don't know what I'd do without them. And they remind me of two very important things: I need to meet my deadlines to get paid, and my readers want their books, and they want them NOW. No slacking!

I get out of my pajamas.  Even if I'm working at home, I try to always shower, get dressed, and brush my hair before I start to write. I know this makes me sound a little like Tracy Flick from Election, but if I get ready for work on the outside, it helps me get ready on the inside.

I light a candle and say a little prayer to the creativity gods.  I try to do this most days.  It reminds me that my output for the day is fifty percent me showing up, and fifty percent purely out of my hands.  If I can just show up, that's half the battle.

If my mind is a blank, I write one sentence. This I got from Anne Lamott's incredible book, Bird by Bird.  Sometimes when we sit down to write the amount of what we want to say is almost overwhelming.  Or we have no idea where to start. Start anywhere, I tell myself.  Just write one line.  And then, just like eating that first potato chip, it can sometimes be hard to stop. Pretty soon the words are coming fast and furious and the characters are telling me what they're saying and then I'm deep inside a scene and boom - it happens. Writing nirvana.  Hours pass by in a blur.  People call and get my voicemail.  On some days, I'll look up and realize that it's late afternoon, and I still haven't had lunch. And this is when I think, discipline? This isn't discipline. This is the best job on earth.

Email ThisBlogThis!Share to TwitterShare to FacebookShare to Pinterest
Labels: Joanna Philbin, Little Brown and Company, Poppy, The Daughters, The Daughters Join the Party, YA book giveaway

Great advice! I like that Joanna writes one sentence when her mind is blank. I do the same, and before I know it, I have 1,000 words.

Wow, Joanna! Fantastic advice. And yep on the hollowed out brain days, lol...you nailed that one.

Have your books in my TBR piles and looking forward to reading them. Glad you've got the discipline "thing" down so we can share your books and have them in bookstores n libraries!

Whenever I discipline myself, I hide my dictionary until I start writing.
Sincerely,
Thesaurus Strictus

Lovely post! Inspirational and practical. Joanna also quoted two of my favorites - Bird by Bird and The Artist's Way.

Exactly what I needed to hear - thank you! Love your blog - I'm a new follower - also related to your love of NYC - just got back to LA after 10 days there - miss it already!

Great advice—I have to keep reminding myself that if I just start ANYWHERE, I'll end up somewhere.

Two books a year—that is amazing and inspiring!

Nice meeting Joanna at the kidlit party, too!

Thanks for commenting everyone. I was really inspired by Joanna's guest post and her commitment to writing. You're right, Laurie. You have to start somewhere! Thanks so much Joanna!

I'm sorry about the delay in drawing a winner for a signed copy of The Daughters Join the Party, but I've had some delays in sorting out my blog domain.
I'm happy to announce, the winner is E.R. King.
Congratulations, Emily! I'll send the book to you as soon as I get your address.