Free Your Mind - Read What You Want 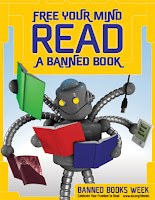 The last week of September is Banned Books Week, the annual American Library Association (ALA) event celebrating our freedom to read.  Reading is a form of nurturing, especially for children. As a kid, I cherished my unlimited access to whatever books I wanted. Of course, growing up in Canada and the Bahamas, I took that access for granted. My parents never censored what I read, and I often borrowed their grown-up books, even though my mother kept me well supplied with stimulating things to read.
Here's a list of absurd reasons books have been banned in the past (courtesy the ALA website):


Ten most farfetched (silliest, irrational, illogical) reasons to ban a book:
The Huffington Post published a couple of great graphics: top ten banned classic children's books and top ten challenged or banned books of 2010 -- and here's the ALA list of banned and challenged books from 2010-2011. There's also a funny essay on books that deserve to be banned from high school syllabi in Salon.com.

I'm giving a way a challenged book from 2010 right here, to celebrate the freedom to read. You can win your own copy of, One of those Hideous Books Where the Mother Dies - by Sonya Sones.

To enter the giveaway, all you have to do is be a follower of this blog, and make a comment about your favorite banned book.

To show your support for the freedom to read, read a banned book, go to an event at your local library and join some 35,000 (at last count) free-thinking readers who like the Banned Books Week Facebook page.

What's your favorite banned or challenged book and why?
Posted by Megan Frances Abrahams at 6:00 AM

Email ThisBlogThis!Share to TwitterShare to FacebookShare to Pinterest
Labels: ALA, Banned Books Week, One of Those Hideous Books Where the Mother Dies, Soya Sones

My favorite banned book was a Biology text book from Jr. High. It taught about The Birds & The Bee, but I only got through Chapter one before my old man forbid the book in the house.

To this day, I still wonder what happened in Chapter Two.

The most ridiculous reason I've heard is number 3: "If there is a possibility that something might be controversial, then why not eliminate it?” Really? You can probably make a case for anything to be controversial if you try hard enough.

I don't have a favorite banned book, I don't usually notice those things when I am choosing what to read, but I will make a point to go buy one this week!

My favorite banned book is Lolita. It's amazing writing, and stunning to find yourself sympathizing with the narrator, who is lusting after a child. Only a great writer could make you see that perspective. Not that I condone it - never - but I really admire the writing.

How about two recent favorites? Trying to come up with my one all time favorite banned book is too hard. I absolutely love WHALE TALK by Chris Crutcher and WHAT MY MOTHER DOESN'T KNOW by Sonya Sones, As the writer of a YA that will (hopefully, eventually, inevitably) cause a lot of people to freak out over the foul language (CURSED...coming to a book store near you at some point down the road), these two writers are (among) my heroes!

My favorite challenged/banned book has always been Huck Finn, though I may need to switch to Harry Potter, just for the countless hours of enjoyment and bonding with my kids that the series has given me.

Thanks so much for commenting, Misinformed, Laurie, Melissa, Karolina and Mary.

Dear MisInformed: Have you ever heard of using a another book cover to hide those risqué biology books?

Laurie, I agree, those reasons for banning books are ridiculous, and stem from fear and ignorance.

Karolina, thanks for those suggestions. I'll have to add them to my reading list.

Mary, I'm delighted to let you know you have won a copy of "One of Those Hideous Books Where the Mother Dies" by Sonya Sones. I'll send it off as soon as I receive your address.