An interview with author Joanna Philbin

on writing -- and the story behind her YA series, The Daughters 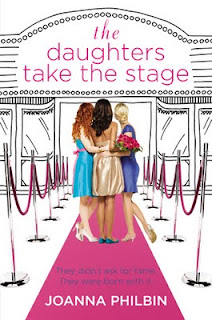 I'm delighted to feature my interview with Joanna Philbin, author of the four-book YA series, The Daughters (published by Poppy, the teen girl imprint of Little Brown and Company, a division of Hachette Book Group, Inc.)

We're giving away a signed copy of, The Daughters Take the Stage, one of the books in the series. To enter to win -- all you have to do is be a follower of this blog and leave a comment.

Joanna is the daughter of television host, Regis Philbin. She started writing her first novel at the age of seven, but that time, only got as far as chapter two. She has a BA from Brown University and an MFA in creative writing from the University of Notre Dame.

I was lucky to get the opportunity to interview Joanna after she and my fabulous son, Shane, met when they were walking their dogs. Joanna has an adorable pug named Edie. To learn more about Edie, and her role in Joanna's writing, read more...

The YA voice seems to come naturally to you. What attracted you to this genre?

J.P. I think as an adult we're all supposed to be over certain things - like, wondering if someone likes us back, or feeling like we really don't belong, or that we don't measure up in some way.  It's like we're all supposed to magically turn into confident, secure adults the moment we turn twenty-one.  Well, I didn't!  When you write for a young-adult audience, you're allowed to talk about these issues and give them weight.  And these are the issues that still matter the most to me.

Writers are often admonished to, write what you know. Your series, The Daughters, is about a group of teenage daughters of celebrities, whose friendship sustains them through the unique challenges they face, helping them define their own identities separate from their celebrity parents. Could you give us a little insight on the genesis of the idea?
J.P. Well, it's sort of related to the first question. For me, I had a lot of concern about creating my own identity, perhaps more than other people, because I grew up the daughter of someone who's very much in the public eye. And these issues lasted maybe a bit longer for me than they might have for other people. I got the idea for The Daughters about ten years ago. I was coming out of the subway in Times Square and looked up at the Jumbotron, the gigantic screen you see on New Year's Eve. For some reason, my dad's show was being broadcast on it, and my mom was hosting with him, and there I was, standing under this massive screen that was fifteen stories above me, with both my parents on it. And that's when the whole concept of The Daughters hit me: three girls living under the Jumbotron, so to speak. But then I thought, who on earth can relate to this? And I pushed the idea aside for years. It finally occurred to me that everyone can relate to the idea of figuring out your own identity, of trying to carve your own path apart from what people might expect you to be.
A lot of writers read my blog, so I like to address the writing process. Each of the books is told from the POV of a different daughter, giving the reader a look inside the world of each of the main characters. Without giving anything away, each of the girls does something that stands out in the course of her own story -- a sort of betrayal -- the kind of thing that makes a reader worry about the consequences, which of course is the whole idea. By pushing your characters to this point you raised the stakes, adding to the intrigue. Do you feel protective of your characters, get attached to them? How did you feel about making them take that pivotal step?
J.P. Yes, that was hard. You want your main character to be someone people will relate to and possibly even admire. You don't want them to get hurt or hurt other people. But you have to let your characters make mistakes. People don't want to read about perfect characters. Perfect is boring. You want your characters to be real, which means flawed. It's also great life advice. Letting your characters make mistakes and not be perfect means you can allow yourself to do the same thing.
If you resemble one of the characters, it's most likely Lizzie, because her passion is writing. Can you briefly discuss this?
J.P. I put a lot of myself into Lizzie. Not just her desire to be a writer, but her insecurities about her appearance and her feelings about the boy she has a crush on. I think that was why I wanted to write her book first. It was the closest story to me.
You reference music a lot in your books, especially in, The Daughters take the Stage. I gather you make playlists for your books. Can you tell us a little bit about this process? Does music help you envision setting and mood? I also got the impression you're a fan of Sharon Jones and the Dap Kings? I am, so I just had to pop this in.
J.P. For the new book that I'm working on, I've found a playlist to be very helpful for the reason you mention, but for The Daughters books, I didn't do playlists.  Instead I just used certain bands and songs to give more depth to a character or a scene. For that scene between Lizzie and Todd in his room I used Detleft Schrempf by Band of Horses because it's one of those soft, slow ultra-romantic songs that you can imagine being kissed to.
To research the character of Alex in the second book, who's a DJ, I interviewed an old friend of mine who's a DJ in Dublin. After he explained how the turntables work and all that, I asked him who he loves to play. He mentioned Sharon Jones and the Dap Kings. And as I listened to them I realized that they were the perfect band for Alex to be into, because it's a soul/funk band that is all about recreating a vintage sound, and he's all about combining the cutting-edge trends with the classics.
For Hudson, music was also very important. I used Nina Simone as a model, because she also started out as a piano prodigy. So music in those books really worked to give nuance to scenes and characters. I don't write to music most of the time, but sometimes writing to film scores can really help me tap into the emotional undercurrent of a scene.
The fourth and last book in the series, The Daughters Join the Party, launches November 1st. Can you give us a brief sneak preview?
J.P. Emma Conway is a free spirit trapped in a family of type A high-achievers.  Her father is a New York senator, her mother is a powerful lawyer, and her older brother is a straight-A student. When her dad announces that he's going to run for President, Emma really faces pressure to be perfect. But she winds up being much more important to her dad's campaign than anyone would have thought.
Any hints on what you're working on now?
J.P. I can't say too much about it except that it will definitely be about friendship, this time between two girls who would seem to have very little in common.

You have the most adorable pug, Edie. I understand she sits in your lap when you write. Could she be something of a muse?
J.P. Yes! She's got such a strong personality. I've learned so much from her. And she does sit in my lap, but then she starts snoring, pretty loudly sometimes, and I've got to put on the headphones.
Thanks so much for the fascinating interview, Joanna! And thank you, Shane,  for introducing us.

The fourth book in Joanna's series, The Daughters Join the Party, is due for release November 1st. Joanna will return here then, with a guest post on a special theme related to writing. I'm really looking forward to it. To find out more about Joanna, visit her website, and read her blog.

Coming up next -- Tuesdays in August, I'll be featuring a series of guest articles by students and graduates of the Vermont College of Fine Arts MFA program on writing for children. Please check back.
Posted by Megan Frances Abrahams at 3:00 AM

As an old dude, I have difficulty including contemporary music in my manuscripts. So I make up bands.
Sincerely,
Playlist Impaired

I've enjoyed these books, as have my 18 and 13 year old daughters. Looking forward to the next one!

Extremly happy that I found this series for my 11 yr old. Thank you so much! Just started to read to my 8 yr old. So happy we have a series for girls without all of the bad stuff going on! Thank you! :-)

It's time I branched out from YA sci-fi/ fantasy - this looks great. It's nice to hear from the author, thanks for the interview.

I think Joanna seems fascinating and I'd love to read these books. I have two pugs so I know other than writing we have something else in common.
I am now a follower of your blog.

Great interview! I haven't read Joanna's books yet, but plan to. Congratulations on your fourth book!

Joanna, you are an inspiration. I can't wait to read your books and share them with my eleven year old daughter!

Thanks so much for commenting everyone. I really enjoyed reading Joanna's books, and it was a pleasure to have the opportunity to interview her. Thanks again Joanna and Shane!

Congratulations, Melissa! You win a signed copy of, The Daughters Take the Stage. I'll send it off as soon as I receive your address.

As for Playlist Impaired - that's a creative approach!