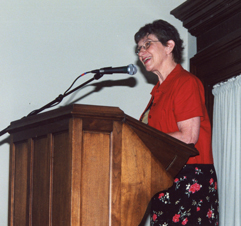 On writing, the future of publishing, and the Chautauqua Writer's Workshop
I'm delighted to feature my interview with Patricia Lee Gauch, author and former vice president and editor of Philomel Books. Now a full-time writer and lecturer. Patti has written more than 40 picture books and novels for young readers, including Thunder at Gettysburg, Christina Katerina and the Box, and The Knitting of Elizabeth Amelia.
Patti has a doctorate in English literature and has taught college level courses on children’s literature. She edited three Caldecott books: Owl Moon by Jane Yolen and John Schoenherr, So You Want to Be President? by Judith St. George and David Small, and Lon Po Po by Ed Young, as well as 2010 National Book Award–winner Mockingbird by Kathryn Erskine.
Patti is also the featured keynote speaker at the upcoming Chautauqua Writer's Workshop, presented by the Highlights Foundation, this July 16 to 23.
You were a reporter before entering the world of children’s books. What, if anything, about your journalism background, has informed your career as a writer, editor and publisher of books for children?
PLG: I had some wonderful years at the Louisville Courier Journal. I was intrigued with the art department. I spent a lot of time watching the art director, Louis Dey, lay out the page -- how he would block out where the art would go, where the text would go. Since then, to the consternation of art directors, I’ve always had an eye for page layout!
Then, you know, the triangular shape of the story is something that places you in good stead forever, the economy of words -- and voice. Once I was sent to Keeneland Racetrack to cover the races. When I wrote the story, I did it objectively. The editor said, “It’s the first time you’ve been to a horse race. I want you there, I want to hear your voice.” So I rewrote it in the first person. In children’s books – picture book or novel – it’s the voice that’s so important. I always tell writers, “Write it the way you would say it to your best friend.” It’s the aberrations of voice – that’s what creates story.
You’ve encouraged aspiring children’s book writers to kick off their shoes as a way to come up with original ideas. I also understand you used to run around barefoot on the beaches of the Michigan lakes as a child. Is there a barefoot theme here? Are you suggesting that aspiring writers locate their muse by channeling their barefoot inner child?
PLG: It’s not a bad idea. My very first book was called, Grandpa and Me. It took place on Lake Huron Beach. It could go in that direction. If you take something on that has emotional content, it has a better chance of taking off. If you write out of an emotional point, you’re one leg up. I would say to most people beginning to write, when you let go to story, you’re letting go to the rhythm of your heart, the rhythm of your breathing. When a writer holds too tight it shows. Go to your own voice.
The reason I say take your shoes off is, go back to when you were a child running around your backyard telling your story. Relax, let go to story, let the story part come to you. As an editor, I saw thousands of manuscripts. Many of them showed an over-awareness instead of relaxing.
Take your shoes off, open the window, feel the wind blow in. Try to catch your conscious off guard. In T.S. Eliot’s essay, Tradition and the Individual Talent, he said as human beings, we store numberless images. It’s in your subconscious. Smells… the cobblestones on the street, the way the snow blows horizontally. As a writer, that’s what you’re seizing on to tell a story. That even goes for form. For Christina Katerina and the Box, I got the form from the numberless images in my subconscious.
Do you have any special plans for your presentation at Chautauqua this year?
PLG: Every year I have a keynote. I have a choice.  I will very often take one aspect of something and really look at it. I think I’m a little outrageous. Last year I did, “a catch in the breath.” Take a really deep breath. How far do you have to go in the climax to get the emotional hit? Just before the sleigh goes down the hill there’s a catch in the breath – ecstasy. In Jerry Spinelli’s Stargirl, the climax is just exquisite. 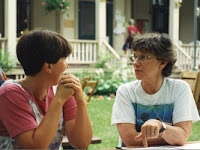 For this year’s keynote, my major thought is that writing children’s books is an act of mischief. I mentioned that phrase at the SCBWI conference in January. There’s a suggestion that you take your shoes off and come play with me. For example, Holes by Louis Sachar – is such a great big act of mischief. We’re talking about the spirit of the book. It should release the writer, give the writer permission to play.  In Kevin Henkes’ Lilly and the Purple Plastic Purse, he climbs right in Lilly’s shoes. We know just how Lilly feels. There’s a catch in the breath.
It’s your 23rd year on the faculty of Chautauqua. What makes this workshop special?
PLG: Those of us who have been on the faculty for years regard it as a privilege. I’ve never come to a year without a sense of exaltation. It’s extraordinary. The place itself is like a throwback in time, an oasis -- a cultural spa. The beautiful big old oak trees and maple trees. We go out under the trees and do one-on-ones on picnic benches. You look under one tree, and there’s Jerry Spinelli. Under another, Sharon Creech. It’s a place where everyone puts their life on hold, and dreams, but with professional support.
It’s notable for its egalitarianism. There are usually one or two major authors a year, but everybody mingles. About 100 people attend, and maybe 17 faculty. All week long you talk words, you talk books, you talk ideas. It’s so rich. It’s just a lot of magic.
What are you writing now?
PLG: I’ve just finally begun to write again, after finishing my (new) website -- which was very time-consuming -- and writing several articles recently. I’m probably going to start with picture books. I have one about the life of Thomas Edison I’m very excited about. I think it’s an original look at Edison. He grew up about 20 minutes from my Michigan cottage so he’s sort of part of my life. Then there’s an idea with my illustrator, Satomi Ichikawa. After that, I will probably move over to a novel.
As a children’s book writer, editor and teacher, you’ve watched the evolution of children’s books from many angles. Publishing is changing dramatically. Can you look into your crystal ball and offer a forecast?
PLG: I just read an article in the New York Times about technology – what gadgets you should keep and what you should let go. The last object is books – keep them, with one exception, e-books.
We spend hours on what text we should use, the design of the book. We think it’s integral to a book. A very handsome screen will never replace a picture book. Turning a page in a picture book is crucial. It’s a wonderfully dramatic moment. We care. We ponder that. To remove that would be losing a storytelling convention.
The future? I don’t know if I can tell, but I can hope. I like to think we’ll have hardcover, paperback and e-book. That is my fervent hope, and I think that is the hope of publishers.
******
Thanks so much for the illuminating interview, Patti.


Coming up soon -- an interview with Kathryn Erskine, author of the 2010 National Book Award winner, Mockingbird.


In the meantime, what are your thoughts on kicking off your shoes to write?
Posted by Megan Frances Abrahams at 3:00 AM

Thanks for this captivating interview! I especially appreciate Patti's reminder to start from emotion. That's where stories begin and end, too--after writers have succesfully infected readers with the same emotion.

My goodness, what an informative interview. I'm with Patricia...I think the future involves ebooks, but I can't imagine the paper book disappearing. I still love turning an actual page.

"Take your shoes off, open the window, feel the wind blow in."

Whenever I take my shoes off, the LA Haz Mat Unit quarantines my street.

Megan, you ask the best questions! Thank you for this wonderful interview.

Wonderful stuff! I had the true privilege of having Patti as my Chautauqua mentor three years ago. She gave honest and very helpful advice and .. after heeding it.. my novel was ready for submission and sold w/in a year! I am so thankful for her insight and help!

Super interview! Patti is wonderful. I met her in 2008 at Chautauqua.

I'm glad she is writing again.