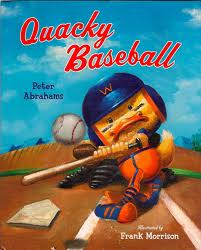 
Please visit the next stops on the Quacky Baseball tour:

First of all, I love baseball, so I need to get the book for that reason alone. Add to that, being the Father of two 5-year olds, it is a great opportunity to pass along my baseball love to them. Lastly, as a school counselor, it will be a nice addition to my library.

I enjoyed reading the interview, too. Thanks a bunch.

Ducks and baseball - what could be a more natural pairing.
I often wondered exactly what an editor did. Now I know. What a fun job. Thanks for the interview.
Dawson

Megan, you know I have been waiting a long time for this blog tour to come. This will be a very interesting week hearing from all the people who created this wonderful picture book. Thank you so much for doing this. I bet your brother really appreciates it too! I can’t wait to read the interviews with Thumby and Peter Abrahams.

Many thanks to Kristin Daly Rens for her insightful answers! She has the best job ever!

Brother huh? Hmmm...talent runs in the family. Is there anything Mr. Abrahams can't write? 25 books! Holy inadequacy Batman, I'm hanging up my keyboard.

Sincerely,
Out In Left Field

Out in Left Field, have you read anything Peter Abrahams has written? He is a most excellent writer that’s for sure. He writes anything from middle school, young adult to very adult thrilling fiction. And now a Picture Book! What’s left? I hope someone asks him that when they are interviewing him.

Congratulations to Peter and Frank and the whole teams. I can't wait to read it

Wonderful work Peter! I am looking forward to learning about baseball. This is just my speed!

Great interview. I've heard wonderful things about Kristin and hope to meet her at a conference one of these days.

And as you already know, I have a five-year-old son who loves Peter's book! So' well be reading Quacky Baseball a lot at our house.

Megan, another great interview. This book is such fun! and I loved reading Kristin's editorial viewpoint. Always fascinating and enlightening hearing from an editor.

Thanks for commenting, Counselor and Dawson. It was such a pleasure to interview Kristin.

As for Quacky Baseball -- what a fun book!

Lee Rae, thanks so much for commenting. Great to hear from you again. I agree, Kristin's answers were so thoughtful and interesting.

I hope you enjoy the tour. I certainly am! And that is a good question for Peter.

Dear Out in left field
You mustn't hang up your keyboard. Look what happened to Susan...

And on that topic -- Susan, thanks for commenting and congratulations to you too! I understand you have a book deal with Beach Lane. Fantastic news!

Pen & Ink, Julie, Corey and Diane, thanks very much for commenting and participating on the tour. I'm glad your son is enjoying Quacky Baseball, Corey, and I hope to meet Kristin at an upcoming conference too.

Great article, Megan. So this proves there's a lot of brilliance in the Abrahams family.

I can't see why picture books would die. I'm so glad that they're still here, and that you, Kristin, think they'll endure. I've read to my children. I read them to my children and loved them as much as they did. And now my grandchildren do. They've GOT to survive.

Thanks for all your work on this blog tour, Megan. It's been lots of fun - at least for me. All the interviewers were great. Meanwhile the Red Sox are off to a shaky start. What's up with that?

My pleasure, Peter. I'm really happy we did the tour. It's been lots of fun for me too. As for the Red Sox -- I felt much better when I realized they still have 159 games to go.

Can't wait to check out Quacky Baseball for my 7-year old son.
I thought the interview was great!

Thanks for sharing Megan.