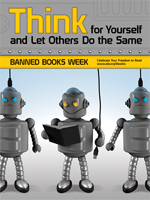 ALA poster for Banned Books Week
September 25 to October 2, 2010

Next week is a nationwide celebration of the right to read what we choose - and that goes for kids too. An annual event since 1982, Banned Books Week reminds us not to take the precious freedom of the First Amendment for granted. It's astounding that censorship and challenging of books still persists  - and that recent children's books like the Harry Potter series, Twilight, and many more gems of the canon, are still challenged today. The University of Illinois has compiled a fantastic list of challenged picture books, chapter and young adult titles, at: Challenged kid's books.

When I was in grade school, we had an English project on censorship, and I was outraged to learn such a thing existed. Even as a kid, I recognized the hypocrisy. I remember asking my mom, "Who censors the censors?" to which she replied, "Good question."

Banned Book Week events will be held at local libraries nationwide. If you're in the LA area, celebrate at the Santa Monica Main Library Join the Banned, on Saturday, October 2 from noon to 4 p.m. for banned book readings and performances.

To learn about a group that advocates for children's freedom to read - visit the Kid's Right to Read Project. And don't forget to celebrate the best way of all - by reading a banned book next week.

Please check back Tuesday, September 28 for a fascinating interview with Dana Goldberg, executive editor of Children's Book Press - on day 2 of the blog tour for From North to South, a new picture book by Rene Colato Lainez, illustrated by Joe Cepeda.

In the meantime, what are some of your favorite banned books? Please comment.
Posted by Megan Frances Abrahams at 2:52 PM