Monsters & Miracles - Journey through Jewish Picture Books at the Skirball 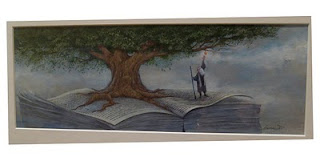 Zohar - Renato Alarcao (Brazil)
acrylic on paper
This magical image of a tree materializing out of a book, sets the stage for Monsters & Miracles - an exhibit at the Skirball Cultural Center that embraces the conflux of books and art. This original illustration is from the picture book, ABC do Mundo Jadaico by Moacyr Scliar (2007). The  book in the image represents the letter Z, for zohar - the classic text of Jewish mysticism. According to Jewish mythology, the tree symbolizes wisdom.
I'm just about to embark on some new illustrations for one of my own picture book concepts, so Monsters & Miracles provided a welcome source of inspiration. More than 130 original works of art from picture books are featured in this awe-inspiring collection. In theory, the focus is Jewish picture books - and although there are representative illustrations of biblical stories, beginning with illuminated art from centuries ago, as well as creatures from Jewish mythology, and images of Jewish village life by artists like Simms Taback - the theme is really much broader. Featured are originals by Uri Shulevitz, Eric Carle, Marc Chagall, Lisa Brown (of Lemony Snicket fame), William Stieg (Shrek), Margot Zemach and Maurice Sendak, among many other great artists.
It's wonderful to be able to see the nuances of the originals - like Eric Carle's delicate tissue paper and acrylic renditions of Noah's Ark, and pen and ink and watercolor originals by Maurice Sendak from the classic, Where the Wild Things Are. Some of Sendak's sensational preliminary studies were also on display.  (For more on the illustrations, visit Diane Browning's blog, Out of the Paintbox.)
Unfortunately, we arrived at the Skirball Center in the late afternoon. We were so captivated by the artwork, the museum staff had to pry us away at closing time. On the up side, the Skirball's wonderful bookstore was open late - and someone had had the foresight to stock many of the picture books featured in the exhibit. We consoled ourselves, revisiting the illustrations in the context of the books for which they were created.
Although many of the books are beautifully conceived works of art in themselves,  we were struck by their inability to capture the texture, color, dimension and detail of the originals we'd been lucky enough to see. If you have the opportunity to visit Monsters & Miracles, take the kids - and go soon - it closes August 1st!
Posted by Megan Frances Abrahams at 12:32 PM

Thanks Megan! I'll make sure to see it!

You should definitely go! BTW - love the painting you're using for your Blogger account. It reminds me of Modigliani.

You captured the essence of the exhibit! It is an especially exciting show of original picture book illustrations.