A Visit to The World of William Joyce 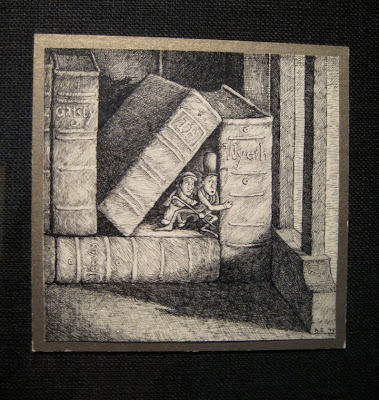 I first ventured into the world of children's author, illustrator and filmmaker William Joyce, watching episodes of his animated television series, Roly Poly Olie,  with my niece when she was little. A current exhibit at the Los Angeles Central Library provides an overview of another side of Joyce - a selection of his wonderful illustrations for children's books: LALibrary

"When I was growing up, nobody thought you could make a living by painting or writing... but things worked out and this is my job. It's like getting paid for recess." - William Joyce
While Joyce devotes exquisite attention to technique and detail, he delights in ignoring the customary rules of scale, point of view and perspective. His imagery is eccentric, whimsical and above all, unexpected. In one of the illustrations for his book, Santa Calls, Santa is depicted as a distinguished gentleman, wearing an elegant vest with a pocket watch, a monocle in his eye, and smoking an ornate pipe. Incongruous hot air balloons festoon the North Pole sky.
Joyce's offbeat humor crops up in every frame: a school house chases children in the playground, a band of tuxedo-clad bug musicians serenades a river at nighttime - and faces appear on everything from buildings to soup ladles.

It's always informative to get an insight into a writer/illustrator's process. This exhibit includes pencil drawings, book dummies, and unfinished illustrations - as well as vivid finished paintings from several of Joyce's picture books.

Here are some William Joyce books to check out of the library:

Or, borrow a DVD of Meet the Robinsons, the animated feature film adaptation of Joyce's book, A Day with Wilbur Robinson.
Posted by Megan Frances Abrahams at 6:00 AM