"Nevertheless, Notwithstanding" - Rediscovering The Golden Phoenix 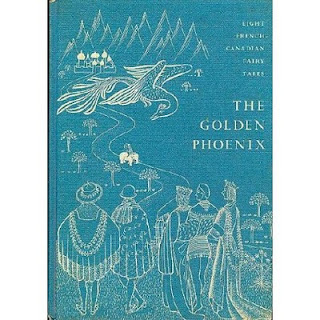 I've just been reunited with a childhood friend. A favorite book - a literary treasure - The Golden Phoenix was part of my family's collection of children's books when I was growing up in Ottawa, Canada. Written by Marius Barbeau, a cultural anthropologist who collected French Canadian folklore passed down through the oral tradition, The Golden Phoenix was first published by Oxford University Press in 1958 and reprinted by Scholastic in 1973. It has been out of print since. I've looked for it at Ottawa children's bookstores when I've gone back to visit, but a few weeks ago, I found an old library copy through an Ottawa book dealer on Amazon.

When it arrived,  I removed the brown paper wrapping like it was an unexpected present. The book was musty and marked here and there with children's scribbles. Stamped, "Wallaceburg Public Library," this copy has passed through many hands. I couldn't stop myself from reading the first story right away,  but I was determined to savor the pleasure by rationing the remaining seven.

Having read the book over and over again as a kid, it isn't surprising that many of the details are indelibly imprinted in my mind. I instantly recognized Arthur Price's timeless illustrations which marry the text so well. Rediscovering it now, the stories are still as fresh and charming as I remembered. Growing up, I read the Brothers Grimm, 1001 Arabian Nights, D'Aulaire's Book of Greek Myths and many fairy tales of different origins, but The Golden Phoenix stood out.

Like most classic tales, these share the theme of cleverness and good trumping evil, greed and trickery. The stories are also faithful to the rule of threes. For example, one of the tales, Sir Goldenhair, begins, "All the best kings have three lovely daughters, and this King that I am telling you about was no exception." What made these tales so satisfying, perhaps, was - they conformed to formulaic structure - but did it in a playful way. The tales of The Golden Phoenix are characterized by an added element of wit.

In the first story, The Golden Phoenix,  two beans are left to cook slowly in a pot. The sound of their cooking convinces the sultan the prince and princess are in the palace, arguing through the night. "As soon as they felt the heat the beans began to croak. One of them said "Nevertheless" in a high voice; the other said  "Notwithstanding" in a deep voice. When they were both croaking they sounded just like a man and woman talking together." In the morning, the sultan finds out the prince and the princess have fled. I've always fondly remembered the idea of two beans arguing. It seems very French, n'est pas?

I am enchanted now as I was then - and delighted to have The Golden Phoenix back in my bookcase.

What outstanding childhood book made a lasting impression on you? Please comment.
Posted by Megan Frances Abrahams at 3:07 PM

Gold Phoenix does sound great, and I missed it as both a child and adult: now I will look, thanks!

After 28 years of marriage, and me carrying on about Little Women through much of that, my husband just decided to read the thing and is enjoying it. Not only that, it's inspired him some to pare down.

The right book at the right time.

Thanks for commenting, Jeannine. That's great your husband is reading Little Women. I wonder how many men - and boys - have entered that literary territory! Of course we, as girls, read Little Men.

I remember this book as a child and loved it. One day I took it to a friend's house and lost it. I was terribly sad. This was truly a fun book and I'ld love to get my hands on it again someday.

In 1964 or '65, when I was 5 or 6, a teacher at my Montessori school handed me this book to read. They had just gotten it in, and she immediately chose me to have the first crack at it, because I was already reading far above my age level. The memory has stayed with me for 50 years now! So I looked it up, and was delighted to see that you seized on the one detail I remembered: the two talking beans going "Nevertheless" and "Notwithstanding"! I thought then and still think now that it was a hilarious ruse. (Even though I didn't know yet what those two words meant, I learned from it that they're words to use in an argument.) Thank you for sharing this memory!

Ooh, thanks so much! I randomly remembered this, much the same as Kyría Ioánna, and was Googling fruitlessly for a few minutes until I tried adding "beans" to the search and got here!

Like Chris Kelworth, it was beans as a search term that found me this page. French Canadian bean soup, so to speak.

I loved this book as a kid. I couldn't remember what is was called. Been thinking about it for months. This morning I googled Sir Goldenhair. And there it was. I ordered it online. I'm so excited. I loved hearing that this book has such a big impression on other people as well.