Popcorn for the Brain: 2 Teens on books are back 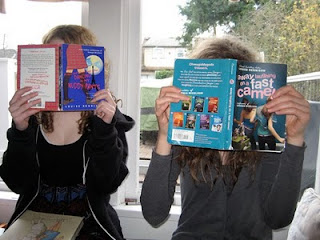 If you happened to read the first two interviews with Rachel and Nicole - my niece and her best friend (see 2Teens and 2Teens2) - you know they have fascinating, even irreverent insights on YA books. The only problem - it's almost impossible to get them to agree to an interview at all. This time, Nicole said she'd go along with it if I gave them each $10. Here's what happened:
I won't pay you - but I agree to a bribe. I'll buy you each a book if you'll discuss what you've been reading lately.
Nicole: I have nothing to say. Except you can say I hate The Hobbit (JRR Tolkien). We're supposed to be reading it in English. In fact, I'm allergic to it.
Ha ha. What do you mean allergic?
Rachel: It actually made her sick.
Nicole: I was reading a musty old copy.
Aside from it making you sick, why did you hate it?
Nicole: It's boring. The Hobbit is bad because it's boring and outdated.
I'm going to try to poke a hole in that remark. I'm sure you've read out-of-date classics you like.
Nicole: Yes - The Hobbit is just boring. I don't like fantasy. I just took out the comic version and it worked fine. It's shorter and it has a lot of pictures. It was tough - I saw my English teacher when I was taking it out of the library.
Did she see it?
Nicole: She didn't. It was just funny. I read the comic book and Spark Notes - but The Hobbit's awful and it should be banned!
What else is on your bookshelf?
Nicole: I read Dear John (Nicholas Sparks) 'cause they made a movie of it - I wanted to make sure it didn't suck - it did.
Why?
Nicole: It was just kind of disappointing. It wasn't a happy ending.
Can you elaborate?
Nicole: It just turned around really suddenly in the last few chapters.
It's a love story, right?
Nicole: Yes.
Did you see the movie?
Nicole: The movie ending was better than the book ending.
Do you usually read the book before seeing the movie?
Nicole: No - I also re-read The Macdonald Hall Series by Gordon Korman - because it makes me happy. I do love these books because they're funny.
What are they about?
Nicole: Two mischievous boys and their life in boarding school.
They're not contemporary are they?
Nicole: No - they're not current but they're fun - they're not that old. I also like them because they're short and I don't have time for long books.
Do you re-read a lot of books?
Nicole: Yes - if I like a book I re-read it.
What about you, Rachel?
Rachel: I'm reading Cue for Treason (Geoffrey Trease) in English.
Nicole: Is it awful?
Rachel: Yes.
Nicole: We have the same English teacher. The curriculum just has boring books.
Rachel: When the book started out, everyone in the class thought it was extremely dull. Then I thought it started to get interesting. The teacher built it up and the book does as well - with a lot of foreshadowing. The author tried to cram too much into a small book and teach us about history. I'm nearly done reading it. In the end, the foreshadowing was way more exciting than the real ending.
Read anything else lately?
Rachel: The Confessions of Georgia Nicolson Series (Louise Rennison). I love those books.
Nicole: I've read them too.
Tell me more.
Rachel: This is about the third time I've read the series. I've read the ninth book and they just came out with a tenth.
What do you like about them?
Rachel: I like them 'cause it's just fun reading. It's like popcorn for the brain.
Nicole: And it has a fun vocabulary.
Rachel: Yes - like instead of saying America, she'll call it, "Hamburger a-go-go-land," and instead of New Zealand, she calls it, "Kiwi a-go-go-land." They're very relatable.
How?
Rachel: It's about a teenage girl's life and reading it makes you feel like you're not alone. It relieves stress because there's nothing too intense. It's pretty mindless - and now I'm done!
On that abrupt note, the interview ended. I thanked the girls and later gave them each a gift card from a bookstore so they could choose something new. Of course, there's a catch. I plan to follow up with them and find out what they chose. Then maybe I can interview them again - if they consent.
Next up - a Q & A with Seth Grahame-Smith, NYT bestselling author of Pride and Prejuduce and Zombies and the new release, Abraham Lincoln Vampire Hunter - I only have about 65 pages to go. Please check back!
Posted by Megan Frances Abrahams at 1:30 AM

Thanks Megan, Nicole and Rachel for a fascinating look at what teens are reading and why?

Very good interview, and true comments-- something to remember, though, is that the readers who LOVE The Hobbit would be allergic to the Rennison! That's why it's good to have lots of different books available to students.

Great interview. It always breaks my heart to hear "the curriculum just has boring books."

Hobbit is boring - oh no!! Sigh. But I love that she read a graphic novel version of it! Great interview. This really tells you that those first pages/chapters have to suck them in. I can't wait to hear about Lincoln and Vampires - haven't read it yet.

Thanks so much for your great comments Terry, Dee, Ms. Yingling and D.M. Cunningham. I feel we should take into account - these two girls are very sophisticated and they read all kinds of literature. I think they enjoy pulling our legs a little. During the school year, they like light reading for escape from academics. As an adult, I forced myself to read Tolkien because it's part of the canon. It's true he created an extraordinary world but I agree with Nicole - there is an element of tedium.
Hope to see you again!

Their take on Gordon Korman is interesting too - his books are always popular in my classroom. :)

Great post! Very interesting reading the opinions of your teenagers, especially as we'd have this exact conversation this week in my school:
Two eleven-year-olds in my class were discussing their experiences of reading, or attempting to read, The Hobbit.
One said she gave up on it at page 50. The other child and I yelled, "No! It gets interesting after the end of that chapter!"
The boy and I compared notes, separated by SEVERAL years, and we both felt if you missed out the boring bit at the start it turns into a really gripping story.

So fun. I loved the "popcorn for the brain" quote. I'm always cornering the teen sisters and brothers of my kids' friends to out what they're reading and why. It's so interesting how dift. their responses are.

Excellent narrative! good th learn teenagers are reading! I thought they had time only for ''extra- curriculars''!
Sweet of u to look at them!

Loved this! So like many of my students. I also agree with ms Yingling, love the Hobbit disliked Rennison. I do think the girls would like the books at my school more though. Much more with it.

Another great interview with these girls! And I'm so happy to find other discerning readers who don't like The Hobbit (which I could never finish) but love the Georgia Nicolson books. :)