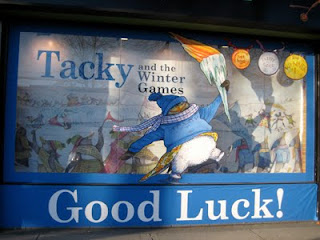 When I arrived in Vancouver during the first week of the Olympics, my intention was to write about the excitement here and weave in some relevant notes on children's literature. I didn't anticipate the Winter Games would be so all consuming that I would abandon my pending projects - including this blog - to immerse myself in the once in a lifetime experience.
Now that the games are over, there's an anti-climactic lull in the city. The Olympic buzz fizzled out with the torch. Why not prolong the aura of friendly competition, awe inspiring athleticism, and international goodwill - through reading. Pursuing this idea, I stopped by Kidsbooks, a wonderful independent Vancouver children's bookstore, to find books on Olympic themes.
For the picture book crowd, the display in one of the windows was devoted to Tacky and the Winter Games (Helen Lester, illustrated by Lynn Munsinger). This funny story is about the antics of a group of penguins training for the Olympics.
Next on my list - a book on sports. Men's and women's hockey were high profile events during the Olympics. How about a book that would be both informative and fun for middle graders? A helpful staff member at Kidsbooks directed me to a display of books on Olympic sports, including, The Biggest Book of Hockey Trivia by Don Weekes - full of games, puzzles and fun.
Canada has been in the center of the world stage recently, rekindling the pride many of my countrymen and I feel in our Canadian heritage. In the aftermath of the games, it seems appropriate to include some contemporary YA fiction by Canadian authors. A few recommendations by the Kidsbooks staff: Alice I Think by Susan Juby, set in Smithers, British Columbia, is a funny story about a girl with an eccentric mother. Last December (Matt Beam) is about a 15 year-old who tries out for the school hockey team. Perhaps more serious, Sister Wife by Shelley Hrdlitschka, is the story of a girl who escapes the polygamous lifestyle in a small British Columbia town.
Finally, why not gear up for the 2014 games in Sochi, Russia by reading some classic Russian literature? Leo Tolstoy's short stories fascinated me when I was a kid. A new translation of his stories has just been released: Stories. Tolstoy is accessible to younger readers as well. The lovely picture book, The Three Questions (Jon J. Muth) is based on a Tolstoy story originally published in 1903. Muth's beautiful watercolor paintings make this book special.
Any comments or suggestions on books with relevant themes - fiction or non-fiction - please send them my way.
Coming up soon - the next in a continuing series of interviews with two witty teens on the books they read and why. Do check back!
Posted by Megan Frances Abrahams at 12:06 AM

Oh, must have been exciting to be there!

Thanks for commenting, Corey. Yes - it was thrilling to be in Vancouver for the Olympics.