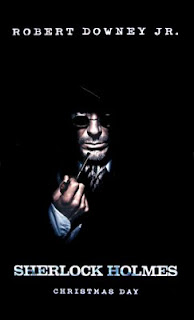 I loved Sir Arthur Conan's Doyle's, The Adventures of Sherlock Holmes as a kid - so if Guy Ritchie's film revival motivates a new generation of young readers to explore the classic literary treasure - that's a bonus. This delightful movie captures both the spirit and essence of what made the original stories so enjoyable: The mood of the foggy dark alleys of 1892 London, the witty banter of Holmes and his sidekick, Dr. Watson, but most of all, the endearing character of Sherlock Holmes with his brilliant mind and powers of detection combined with the flaws that made him more real - including a weakness for opium - a detail hardly implied in the movie.
Then there's the impeccable casting of Robert Downey Jr. as Holmes, and Jude Law as Watson. Each assumes his individual role with flair, but even better - their combined on-screen chemistry gives this movie the added appeal of a good buddy caper.
Sherlock Holmes is a fun rollicking adventure film that distills down to the timeless battle of good over evil. Apparently, it's enough to have the elementary components of a good film - great directing, acting, dialog, wonderful editing, and a well-conceived soundtrack - not to mention riveting fight scenes. By definition of its setting, the film is a period piece that had to limit the use of special effects to avoid going anachronistic. It's interesting to note that Sherlock Holmes opened the same week as Avatar - a phenomenal film which is almost entirely about the effects - device over the traditional elements of movie making. What's so refreshing is to see that a good action/adventure movie can still be made without having to rely on tricks.
Having seen the movie - I want to re-read Sir Arthur Conan Doyle myself.
Posted by Megan Frances Abrahams at 11:17 AM

Can you believe I haven't read Sherlock Holmes??
I will have to one day. I'll probably see the movie first though! :) I'm glad Robert Downey left his demons behind and came back to what he does best: acting!

Enjoyed visiting your blog - your paintings charmed me! And I am glad to read this glowing review - I didn't get to see the movie over the holidays, but will see it soon or on Netflix. I have always loved Holmes, and now you have me thinking it's time for some re-reading!

It's interesting - and helpful - that you want to re-read the books. I loved the Sherlock Holmes books, but have been "eh" about the movie. Maybe it's time to reconsider.