Idealism v. Cynicism: Perceptions of an astute teen on YA books 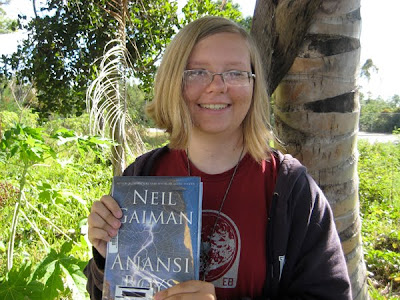 While waiting at a tiny airport on a Bahamian out island recently, I was delighted to talk to Conor, an eloquent 16 year-old with a fascinating perspective on YA books. I wanted to get a nice background for her photo and I led her into the shrubs, where her clothes got covered in burrs. After that, Conor was such a good sport, she was still willing to answer my questions:
What are you reading right now, Conor?
Anansi Boys by Neil Gaiman.
Where are you in the book?
About a third of the way through it.
How are you liking it?
It's a really good book. He's a really good writer.
Why do you like the book?
It's just the writing style - it really sucks you in - even if it's a boring part - he makes it interesting.
What other books of Gaiman's have you read?
I read American Gods, - this is sort of a sequel of that - Coraline and Good Omens, which Gaiman co-wrote with Terry Prachett - a comedy. I've also read the first of the Discworld series (Prachett).
What are your favorite genres?
I like fantasy and science fiction.
Why?
I like the idea of world building, having a world with concepts that are foreign - like dragons. In my own writing I have things like that.
Oh, you write as well. What are you writing?
I'm on a writing team for an Internet radio play - I'm also an Internet radio DJ.
That sounds really interesting. Can I give you a plug?
The online radio play series is called, Tree from My Youth - at: tree
Any other books you've read recently?
I just finished Lord of the Flies (William Golding) - which sounded like a great book to read on a remote island - about a plane full of people that crashes on a remote desert island!
Ha ha! What did you think of it?
The ending was told to me, so I knew what to expect. I wanted to read it anyway - knowing what would happen. I'm not exactly a sucker for happy endings. The one thing I can really say that's bad about it was it could have changed in tone.
Can you explain what you mean?
The story started with a negative tone - and it ended negative. It would have been better if it had started a bit more positive and when things went downhill - if it got more negative. It was the same sort of genre as My Side of the Mountain (Jean Craighead George) - about a kid who decides, "Hey, I'm sick of New York," and he goes out and lives in the Catskills and survives. Lord of the Flies is more cynical. My Side of the Mountain is more idealistic.
Great analysis. And now, Conor, let's have it. I gather you borrowed Anansi Boys from the library. Would you mind telling me why you were hiding the library code?
The due date is November 24 and I realized I'm going to be in the Bahamas then so I probably won't be able to return it on time. And I probably won't return it until I finish reading it. It's going to be very overdue.
What a dedicated reader. Thank you, Conor. It was great talking to you. Please stay in touch. I'd love to interview you again!
P.S. And thanks to Conor's Dad, Norm. If it hadn't been for Norm, I would have missed the flight - as well as the opportunity to talk to Conor.
Posted by Megan Frances Abrahams at 9:01 PM

Email ThisBlogThis!Share to TwitterShare to FacebookShare to Pinterest
Labels: American Gods, Anansi boys, Coraline, Good Omens, Jean Craighead George, Lord of the Flies, My Side of the Mountain, Neil Gaiman, Terry Prachett, Tree from my Youth, William Golding, YA books

Great interview. Conor will no doubt be a great writer.

I fully agree with her about Neil Gaiman. I'm a big fan, and an even bigger fan of Terry Pratchett.

Thanks, Samantha. It was a lot of fun interviewing Conor.

I found my way here from Mother Reader's site and I'm really enjoying your blog. Love these interviews with young readers! What a great idea. Looking forward to reading more of your blog.

Great interview! I too love Neil Gaiman and Terry Pratchett. The teens in the bookclub I run at my library just recently chose to read Good Omens, and they loved it!

There's hope for the future! Thanks.