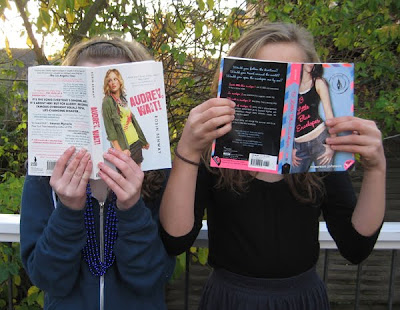 While my 13 year-old niece Rachel and her best friend Nicole carved artistic pumpkins one recent afternoon, I took advantage of the opportunity to catch up on what they've been reading lately - in follow up to my interview with them last August. You can read the first interview at: 2TeensOnBooks. Here's what we talked about this time:
I have an announcement to make. I've decided this will be a quarterly interview. Every three months I'll find out what books the two of you are reading, and get your impressions.
Rachel and Nicole: (much eye rolling and grumbling)
Indulge me - and my readers. Your opinions are insightful and compelling. People want to know what you have to say. So, Nicole, what have you read lately?
Nicole: I haven't read anything. School started, which ruins everything. I've read absolutely nothing except for stuff in school.
And - what are you reading in school?
Nicole: In English class, we're reading, The Absolutely True Diary of a Part-Time Indian (Sherman Alexie). (Nicole then revealed that her grade 9 English teacher had read some racy passages out loud in class.)
What do you think about this book?
Nicole: It's set on an Indian reservation. It's funny. It's kind of humorous but also serious. It deals with the character of a teenage boy. It's not what you'd typically read in school. Oh - I did read something else - The Pretty Little Liars series (by Sara Shepard).
Did you like it?
Nicole: It was very good - kind of creepy. It's about a dead girl - not dead actually - she disappeared - went missing. She starts to text these girls, and stalk them. It was a chick lit book.
What did you like about it?
Nicole: It was just fun, original. You don't see stories like it often. The characters become very developed. You start thinking you know them. You start to empathize with the girls that she texts. It's not really scary but it's creepy.
Thanks Nicole. Rachel - what have you read recently?
Rachel: I started one book - 13 Little Blue Envelopes (Maureen Johnson). It was a good book but there were some creepy aspects. I stopped reading it when school started - there were a lot of other things to do. You have to get to bed earlier and you don't have time for reading. I'm planning on finishing reading it for an oral book report in school (grade 8 English literature). I stopped reading it because of the creepy aspects - but this time, I'm planning on finishing it with a lot more lights on!
Tell me about the creepy aspects.
Rachel: The book starts when this 17 year-old girl goes to pick up a package at her dead aunt's apartment. The whole book is her dead aunt's notes. She has to open the notes one by one and complete the task before opening the next one. The reason it's creepy is the notes are coming from her dead aunt and you don't know how.
When I got these books, I was also interested in the series Nicole read - so I asked her to read them first - so I could find out what they were like. She's less scared of books like that.
Good system! Did you get any other books since the summer?
Audrey Wait! by Robin Benway - but I haven't read it yet.
Thanks, Rachel. We'll talk again in the winter - that is - if the two of you agree to another interview.
Posted by Megan Frances Abrahams at 3:44 PM

I love how smart and funny Nicole and Rachel are!

Thanks, Caroline. Yes - they are very smart and funny!

These interviews are great. I wish they were monthly -- although I know the grumbling aspect would increase exponentially.

Thank you, Kathy. You're right about the grumbling though - I hate to be a nagging aunt - but I wish I could induce the girls to be interviewed more often. In the meantime, I'm looking for more sources. If anyone knows kids with things to say about books - send them my way!