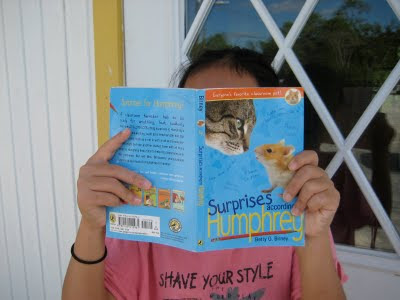 I met 11 year-old Amy on a recent trip to the Bahamas - and was interested to find out what this enthusiastic grade 5 student and avid reader had to say about her favorite books:
What's the most recent book you've read?
"Surprises according to Humphrey," (by Betty G. Birney).
Tell me about it.
It's about Humphrey, who is helping his class. Humphrey is a hamster - a classroom pet.
What did you like about this book?
I just like animal books.
Do you have pets?
I had one. A dog - in Korea. We gave it to someone because my brother had allergies.
Do you have a class pet?
We have Izzy - a lizard. But I don't really care about him. He's boring.
Why isn't Humphrey boring?
Because Humphrey's always doing something. He was worried about aliens.
What did he do about it?
He hid from them.
Where did he hide?
In his bed.
Were they really aliens?
No. He just thought they were. Someone was supposed to clean his classroom but she didn't come. Someone else came and she had MP3 headphones - Humphrey sees the headphones and thinks she is an alien.
Is the book funny?
Yes. I like funny things.
What other books have you read recently?
"Sheep" (by Valerie Hobbs) - it's about a dog.
Ha ha! Tell me about it.
It's about a dog that was born on a farm where the dogs make sheep go where they say to go - and he did it and he liked it. But then he was sold... he lived in different houses and then he ran away and met a boy. The boy liked him and named the dog, "Jack."
What did you like about the book?
I like dogs!
Any other books you've read lately?
"Hatchet" (by Gary Paulsen).
What's it about?
A boy who had divorced parents - his dad was in Canada and his mom was in America... A pilot taught him how to drive a plane but the pilot dies.
Wow! This sounds like a serious story. What made you read this book?
I read it in class because the teacher said to read it.
Can you tell me more about it?
The boy flies the plane. He goes in the forest and almost crashes in a lake. The mosquitoes come out - he finds berries and catches fish. He learns by himself... then a moose attacks him and a tornado comes, and all he has left is a hatchet which his mom gave him.
This is a book about survival. Did you care about this boy?
Yes.
So - you like funny books but you like serious books too. What is it about these very different kinds of books that makes you like them?
If it's interesting it makes me read it - because I don't know what will happen next.
That's great answer, Amy. Thank you so much for talking to me about books!
N.B. Coming soon - an interview with a savvy and eloquent 16 year-old named Conor. Please check back - even better - why not become a follower?
Posted by Megan Frances Abrahams at 6:13 PM

Email ThisBlogThis!Share to TwitterShare to FacebookShare to Pinterest
Labels: Hatchet, Sheep, Surprises According to Humphrey

I love these interviews. I could read kids' responses (and their plot summaries!!) forever.

Amy has great taste in books, by the way. :D

Thank you for the book suggestion. What a great idea-interviewing readers-love it.

your profession sounds interesting. I am just south of you on the 405.