Notes on a Wild Rumpus 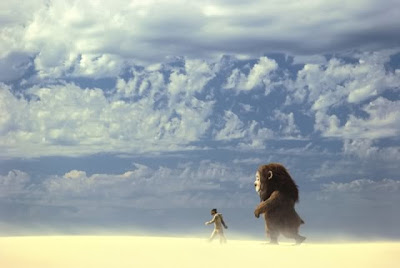 After many long months of anticipation leading up to the release of Max's wild rumpus on film, at last, I saw Where the Wild Things Are. Can anything live up to that kind of build-up? I've realized it doesn't matter - the fascinating thing is to be immersed in the director's vision of Max's world. Like any adaptation from a book - particularly one treasured in my memory - it's intriguing to compare this new interpretation with the one I carry around in my head.
Extrapolating from the ten sentences of Maurice Sendak's original, Spike Jonze has provided the motivation on which the story rests. The first few scenes introduce Max and explain his anger and frustration. In the real world, his sister's friends wreck his igloo. His mother, preoccupied with her boyfriend, isn't giving Max enough attention. At home, in everyday reality, Max has no power. So why not escape to an imaginary world where he can have control - even preside over this wild realm as king?
When Max steps off the shore and onto a boat, tossing over the wavy sea, he has entered the realm of fantasy. But even that realm can be scary. The waves are rough and the wild things fight. Spike Jonze departs from Maurice Sendak's original in that Max doesn't escape conflict in the fantasy world. The imaginary world isn't perfect either. As wild thing Carol said,"It was supposed to be the place where only the things you want to happen happened." But apparently, there is conflict and trouble even in the imagination.
The film is visually enchanting, with Jeff Thorp's art direction and costume design by Casey Storm. The nuanced features of the wild things help to convey multi-dimensional characters with emotion and sensitivity. My favorite scene visually - when Max and Carol walk across the desert. I love that landscape, and Carol's bleak remark, "I don't even know what comes after dust."
The ending was the biggest surprise - a profound departure from the book. I expected Max to wake up in the fort on his bedroom floor with his stuffed animals sleeping in a pile, the toy boat in a puddle of water, and his dinner on the bedside table - still hot. After all - wasn't the wild adventure all in his head?
But at the end of the film, Max leaves the wild things and returns across a now calm sea. He parks his boat on the shore and runs through the streets back home, where his mother is waiting, frantic with worry. She knows he has been gone. Jonze is pulling our leg. In his vision - fantasy and reality merge. Did it really happen?
After we saw the film, my son, his friend and I went straight to the children's department at B&N to re-read the Sendak book. Yes, we confirmed, in Sendak's story, the fantasy began in Max's room, when the trees began to grow.
Regardless, as Sendak himself has said, the film is true to the spirit of the book. It captures with eloquence the point of view of Max, a child who feels powerless to control his reality. In the end, Max acknowledges he's not a king - he's just a boy. He resolves the wild conflicts of his imagination and can safely return to the real world.
Fascinating and provocative. I'm still pondering the vision Jonze portrays. And clearly, leaving me suspended in wonder is the whole point.
Posted by Megan Frances Abrahams at 11:23 PM

Email ThisBlogThis!Share to TwitterShare to FacebookShare to Pinterest
Labels: Maurice Sendak, Spike Jonze, Where the Wild Things Are Movie

I suppose I'll have to see it, but I don't like the "idea" of turning a 10 sentence picture book into a full length feature. I know.. I should be more open-minded!

Yes, Corey - I know what you mean. What's so interesting though - is Maurice Sendak's apparent whole-hearted endorsement of the movie.